The SPRINT Trial was an important trial for the evidence base in hypertension. Previous studies had shown that intensive BP lowering in patients with type 2 diabetes (<120 vs <140 mm Hg) and in patients who previously had a stroke (<130 vs <150 mm Hg) resulted in no significant benefit in major cardiovascular events (except for stroke in diabetics). The natural question arose about whether tight BP control in patients without diabetes or previous stroke mattered more than less intensive control? This became even more important as JNC-8 recommended less stringent goals than previous JNC guidelines.

Unfortunately I have seen physicians I work with and residents become overzealous in extending SPRINT results to other patient groups, especially those which it excluded. Interestingly, when I question them about SPRINT and who was actually studied they either assumed it was all patients with HTN (because they hadn’t actually read the inclusion/exclusion criteria at all) or knew who it was restricted to but assumed that higher risk patients with diabetes and stroke would equally gain benefit (or even more which seems intuitive).

So my 1st point to make is that you should actually read a study and know who was studied (and importantly who wasn’t) before you start using it.

This seems like an intuitive statement but many of my colleagues and trainees simply haven’t closely examined the study. They have heard abbreviated results in conferences or from faculty in clinic and assume that it applies broadly.

So who was in SPRINT? To be included a patient had to be at least 50 yrs of age, have a systolic BP of 130-180 mm Hg, and be at increased risk of cardiovascular disease (clinical or subclinical CVD, CKD with eGFR 20-59 ml/min, Framingham 10-yr risk >15%, or be over 75 yrs of age).  Patients with diabetes and prior stroke were excluded. Lets see what they looked like by checking out Table 1. 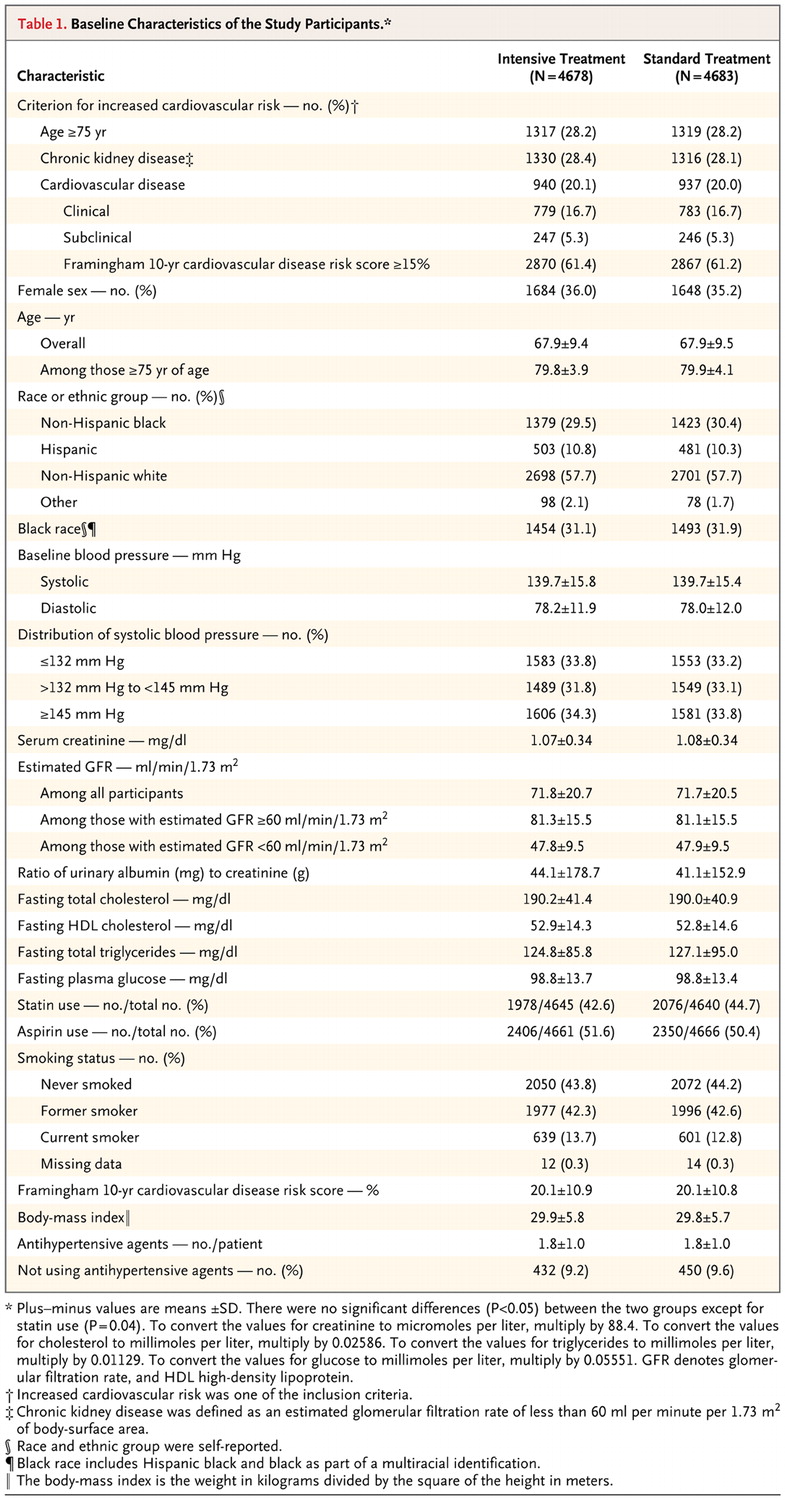 These patients had pretty good baseline blood pressures and were already on almost 2 anti-hypertensive meds to start. They had fairly good lipid profiles and around 43% were on statins. The majority were nonsmokers and had 20% 10-yr Framingham risk. These patients are somewhat healthier than the patients I see.

Point 2: Compare patients in the study to who you see. Are they sicker or healthier? How would you adjust the results to fit your patients?

Don’t assume the study enrolled the average patient or that your patients will be just like those in the study.

In Part 2 I’ll analyze the intervention and outcome measures of the study.