Treating Low T can be dangerous

I am bombarded with low t (low testosterone) commercials on the radio and television. There is a men’s health clinic in my city that will screen and treat men for this horrendous affliction. They guarantee greater sexual prowess and a happy marriage. What they don’t mention are the side effects that can be deadly.

An important study was published in JAMA in 2013 that showed increased cardiac risk in veterans who were prescribed testosterone. The caveat of this study is that all the patients in the study had undergone cardiac catheterization and thus were at higher risk for CAD than those who don’t undergo cardiac cath. As shown in the image below at any given point during follow-up those assigned to testosterone were at 29% greater risk of death, MI or stroke than those on no testosterone therapy. Adjusting for the presence of CAD had no effect on the estimate of outcomes. Thus, even those without CAD (by catheterization) were at increased risk of death, MI and stroke. Most patients in this study got patches or injections. Around 1% got the gel.

A new study has looked at differences in risk among different testosterone dosage forms. This was a huge retrospective cohort (544K patients): 37.4% injection, 6.9% patch, and 55.8% gel users. The outcomes of interest were myocardial infarction (MI), unstable angina, stroke, and composite acute event (MI, unstable angina, or stroke); venous thromboembolism (VTE); mortality; and all-cause hospitalization. They compared these outcomes between injection users and gel users and between patch users and gel users. They didn’t have a nonuser group but that wasn’t really needed as risk compared to nonusers has been established with the study I noted above. The results are shown in the 2 figures below. 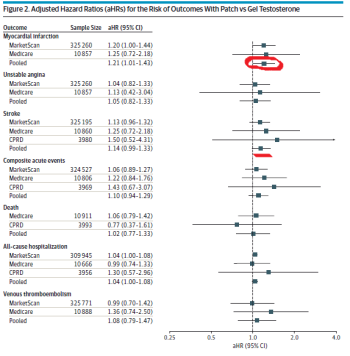 The bottom line is that you should have a good reason to replace testosterone and not just because the patient’s T is low. You should consider the cardiovascular risk of this drug and counsel the patient on this risk (in addition to risk of prostate cancer and polycythemia). If you choose to replace T then the gel is the safest followed by patches.